Attic/penthouse in Via Ippolito Rosellini a Milano

Milano (Milano) - Via Rosellini 26- Quartiere Isola
In an elegant building from the 70s, we offer for sale a 185sqm penthouse with a panoramic terrace, very quiet and bright.
Located on the sixth floor with two lifts, the apartment consists of: two entrances, large open space living room with living and dining area, kitchen, night hallway usable for large wardrobes, 1 bedroom / study with bathroom, two double bedrooms, large bathroom with tub and shower, a balcony and a scenic L-shaped terrace of approximately 50sqm overlooking the UniCredit Tower and Bosco Verticale.
The heating is centralized with thermovalves. Full day concierge, large internal courtyard and pleasant common garden.
Two car garages and a cellar complete this solution.

The island is located north of the city center, outside Porta Garibaldi, from which it is separated from the railway station of the same name; the district was built on the pre-existing countryside in the period between the nineteenth and twentieth centuries. Isola is a trendy neighborhood characterized by graffiti and narrow streets full of trendy boutiques, organic food and thrift shops. Next to the cozy family-run trattorias there are trendy cafes housed in green courtyards, while the informal bars inside the former warehouses of the area.

Well connected to the undergrounds of Isola, Zara and Sondrio. The two most important railway stations in the city of Milan (the Central and Garibaldi) are pleasantly reachable with a walk. The area is well served by pharmacies, supermarkets and bars. The presence of schools and parks nearby make the area even more lively. 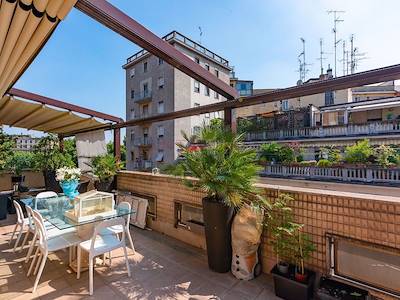