Apartment in Via Antonio Pollaiolo a Roma

Roma (Roma) - In the exclusive setting of the Parioli district, overlooking the music auditorium, we offer a representative building of 260 square meters. The property, located on the fifth floor of an elegant building with concierge service, enjoys a splendid triple exposure that makes it bright. The internal layout, rational and functional, is characterized by an excellent division of the reception and sleeping areas. The living area consists of an entrance, double living room which leads to the terrace, dining room and kitchen with balcony. The sleeping area consists of two master bedrooms, a single bedroom, two bathrooms and a balcony. The service area is perfectly independent, divided into a bedroom, bathroom and laundry room. The property includes a cellar and an assigned uncovered parking space. In addition to the excellent views, even in the lateral detachments, the privacy and brightness characterize the property and make it the ideal choice for professionals and families who wish to live in a prestigious and refined setting.

The Parioli district is the second district of Rome whose name derives from the name of "Monti Parioli", given to a group of tuff hills before the urbanization of the area, which took place in the early twentieth century. Some say that the name derives from peraioli, for the cultivations of pear trees that were there. Large avenues, such as viale Parioli, extended to viale Liegi, avenues Tiziano and Pilsudsky conceived as a "city walk" with a side track-canter in the shade of the trees and next to elegant villas for the rising bourgeoisie. With the advent of the fascist regime, the Parioli became an "aristocratic zone", destined for the hierarchs of the regime, even though they had already hosted many nobles and exponents of the bureaucracy that arrived in Rome with the Savoy. The neighborhood was completed during the 1950s.

For the 1960 Olympics, held in Rome, the area between the slopes of Villa Glori, Via Flaminia and Viale Pilsudsky was chosen to build a series of important sports and service facilities. The residential hill thus quickly becomes a service and transit area. The neighborhood is home to embassies and consulates, foreign banks and finance companies and a myriad of studies and offices. The presence of professionals and tertiary activities have determined the rapid multiplication of bars, restaurants and shops. 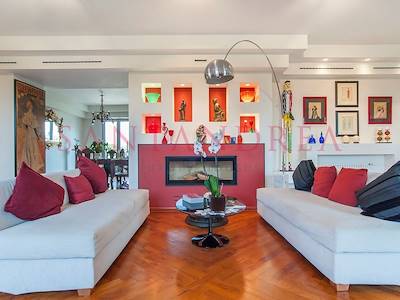