Apartment in Via Ippodromo a Milano

Milano (Milano) - In the San Siro district, in one of the most historically coveted complexes, with daytime concierge, communal garden, fountains and guarded garage, we offer a beautiful 178sqm apartment with a large livable terrace. The apartment is on the first floor. In this complex, unlike other solutions, this floor is particularly sought after compared to the intermediate ones, as in spring and summer it surprises with an extraordinary garden effect. Bright and elegant reception room with access to the terrace and views of the greenery. Adjacent to the eat-in kitchen, with shelves and coatings in Carnic marble. From the living area to the night area. Three large bedrooms, one of which is now used as a study, two bathrooms finely covered in marble, and a service area. The terrace, livable with one of the entrances directly from the kitchen, is ideal for large tables and summer conviviality. To complete the offer, a large garage ideal for two cars. Inside, a sort of cellar has been created, with a door, which can be removed and used for another car.

The San Siro district will have a very different face in the coming years thanks to the profound redevelopment approved last July. Elements of enrichment and regeneration will be brought to an area that has always been of value, so inserted in the greenest area of ​​Milan that starts from Montestella, passes through the Hippodrome to continue with the Trenno park, the Bosco in città and the Parco della Cave. An immense area, which only very few metropolises in the world have, where sports and outdoor life are at home, where squirrels live undisturbed and on the other hand an area well served by the subway and many other means of transport. transport.

Line M5: San Siro Stadio, San Siro Hippodrome, Piazzale Segesta and Piazzale Lotto stations Line M1: Piazzale Lotto station The San Siro district is crossed to the east by the external ring road (of the 90/91) and is bordered to the west by Via Novara, that is the urban penetration axis of the Strada Statale 11 Padana Superiore. In the district there are various underground stations: the San Siro Stadio, San Siro Ippodromo and Piazzale Segesta stations, along the M5 line and the Piazzale Lotto station, interchange between the same line and the M1 line. Various bus, tram and trolley bus lines, managed by ATM, connect San Siro to the neighboring districts and to all the other districts that arise along the ring road. 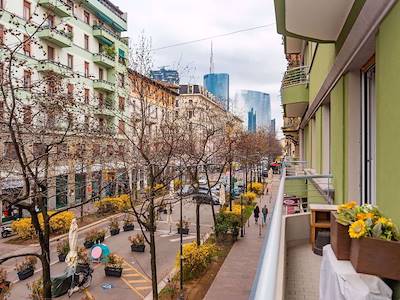