Apartment in Via Pontida a Milano

Milano (Milano) - In the prestigious setting of the Moscova district, we offer a bright and spacious apartment on the third floor.
The house is in excellent condition, furnished with quality furniture and accessories and consists of: large living room with open kitchen, two bedrooms, bathroom and closet.
The building is in excellent condition and is equipped with a lift and concierge. The property includes the double garage included in the price.

In medieval times the area, located outside the Milanese walls, was used as an agricultural area. Later with the successive various phases of medieval expansion of the city walls, the area was incorporated within the city perimeter and used as a cemetery; later, the church of Santa Teresa e Giuseppe (now home to the Mediateca) was built in Baroque style and various monastic convents for nuns which were then used in the Napoleonic era as a warehouse and to house artisan workshops for the production of tobacco, called Regia Manifattura Tabacchi. Further excavations in the street brought to light that in 1614 a monastery of the order of the Discalced Carmelites was built there and in 1615 the church of San Carlo. These complexes in the Napoleonic era were confiscated and converted into industries and factories. Furthermore, at the beginning of Via Moscova there were in 1777 a foundry and a metallurgical workshop that worked silver, which in 1814 Napoleon had it annexed and converted as a state mint. In contemporary times, there is the Regional Revenue Directorate for Lombardy, the Church of Sant'Angelo and the annexed Franciscan Convent of the Friars Minor, whose church houses a fountain called "rotten water" in its churchyard for the its sulphurous water. There is also the deconsecrated church of Santa Teresa, which houses the Santa Teresa Mediateca where the Braidense National Library is housed.

A truly lively area full of all kinds of services. Lots of bars and restaurants. Well served by public transport. A few steps from the historic center and Brera. a walk from Parco Sempione on the Civic Arena side. Piazza del Duomo 2Km; Castle Square 1.4 Km; Fashion District 1.8 Km; Civic Arena 750 meters. 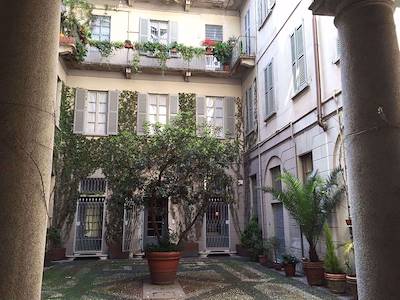